The Royal British Society of Sculptors

John Bunting was himself a Fellow of the RBS, put forward by Leon Underwood and seconded by the then President, Bainbridge Copnell in 1965. Though he was unable to regularly attend the Society from so great a distance up in North Yorkshire, as the expense  of travel became increasingly prohibitive, he was nonetheless awarded the Society's Otto Beit Medal in 1986 for his re-working of Deposition, in stone, for the garden of St Dunstan's at Ampleforth College.

The long association with the RBS was celebrated in the 10th anniversary of Bunting's death in May 2012 at the launch of the book on his life's work Spirit of Faith and a small retrospective exhibition, the first ever in London of a collection of Bunting's works. Leading sculptors and ex-students of Bunting's Charles Hadcock and Anthony Gormley provided compelling testimonials to his inspirational teaching while at Ampleforth, and the particular gift of empowering them to 'observe and really see' the world around them. 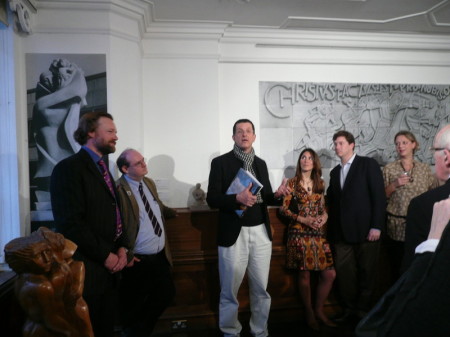 Charles Hadcock, Jonathan Black, and Anthony Gormley at the RBS, May 2012